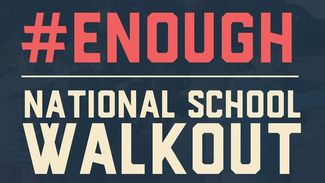 Students from all over the United States – from middle school to college – are walking out of their schools today, as a part of National Walkout Day, to call on Congress to pass stricter/ tighter federal gun laws. They demand action on gun violence, in what is said to be one of the biggest demonstrations yet of student activism, one month after the mass shooting at Marjory Stoneman Douglas High School in Florida.

More than 3,000 walkouts were planned around the country, and even the world, according to organizers. Students were urged to leave class at 10 a.m. for 17 minutes – one minute for each of those who were killed in the Feb. 14 massacre.

Instead of "walking out," the Borrego Springs Middle and High School held a 17-minute recess to commemorate the 17 killed in the Parkland shooting.

In terms of law enforcement, they are aware of the walkouts, and ask that students and administrators be sure those leaving campus ensure their safety, as well as drivers and other pedestrians. To also respect the instructions of school officials.