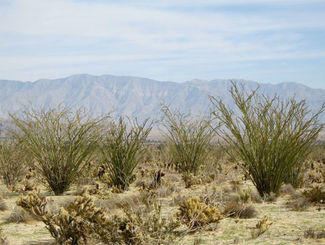 In a unanimous, 7 – 0, vote the Borrego Springs Community Sponsor Group rejected Rudyville's Property Specific Request (PSR) to increase its zoning density from one home per ten acres to one home per acre. The meeting, which drew a crowd of 60, was held at Borrego Springs High School March 1.

Rudyville, officially known as DS-24, is a 170-acre parcel of pristine desert habitat located in a flood plain west of Borrego Springs Road between the mile 9 and mile 10 markers. It is home to an old growth Ocotillo forest, a relic sand dune, threatened and endangered species, and forms a large swath of the iconic southern entrance into Borrego Springs.

Since 2006, the owners of Rudyville have petitioned the County to zone the property for 170 one-acre residential lots. One of the owners, Chris Brown, formerly served on the staff of Supervisor Bill Horn.

Rebecca Falk, Chair of the Sponsor Group, began the discussion of the Rudyville agenda item by asking if anyone in attendance intended to speak in favor of the DS-24 request for increased zoning density. Not a hand was raised.

The Tubb Canyon Desert Conservancy will be coordinating a petition and letter writing campaign in the months prior to the public hearings of the County Planning Commission and the County Board of Supervisors, where the fate of Rudyville will be determined. The dates for these hearings have not yet been set. All interested community members who would like to be informed of the dates, times, and locations of these public hearings and/or would like to participate in making elected representatives aware of community sentiment regarding Rudyville are invited to sign up for the Rudyville Mailing List at http://www.tubbcanyondesertconservancy.org.

Full article in the March 8 issue of the Borrego Sun!