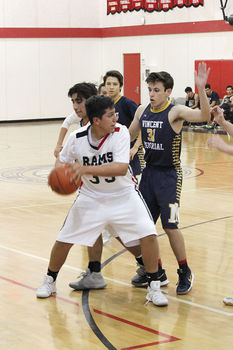 The Borrego Springs boys basketball team took its final swish at home of the regular season.

A slow start to each quarter, and forceful defense, the Rams were bested by the Vincent Memorial Scots, 73 – 23, Feb. 13.

The Rams came alive in the third and fourth quarter, playing stronger defense and put up back-to-back shots and free throws.

The adrenaline was felt throughout the gym.

However, their efforts to catch up were not enough to contain the Scots pressure defense and acrobatic shots, as the game ended without a Rams win.

It's not exactly how the season should have ended, but the Rams basketball team worked hard all season and showed extensive efforts, and great sportsmanship that goes a long way.

The team was aggressive when they had to be, and never gave up. Whether the game was close or a not at all, they never stopped trying.

The Rams bid farewell to five seniors, who have continously worked hard and gave their all to the team. There is much to work on in the off-season, and a lot of catching up to do, but the Rams hope to come back better next year, and be contendors for a championship.

The team also faced the Wildcats at West Shores Feb. 16 to finally wrap up the regular season.Full article in the Feb. 22 issue of the Borrego Sun.