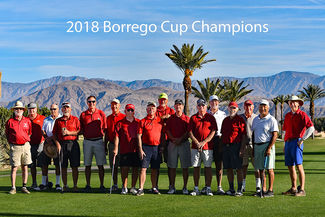 It was Borrego Springs Resort Men's Club President Leon Fuhrman who remarked casually before the start of the 3-day Borrego Cup that his team is looking to repeat last year's Borrego Cup win. Considering how close in terms of daily points accrued (Bogey=1, Par=2, Birdie=3, Eagle=4) in the annual contest between Rams Hill, the Resort, and de Anza over the years, was that comment either wishful thinking, or confidence? Resort team captain Mitch Mossay said, "The home team (on each day) usually wins." He went 2 for 3 in what turned out to be a three-in-a-row Borrego Cup win for the Resort team.

Speaking on the Resort win, Leon Fuhrman commented, "It was a team effort that brought us back from a second place start the first day to retain the Cup."

Mitch Mossay said it was the "first time anyone has won three in a row since we've had three teams." He sent that via email so it's not known how far out his chest was sticking when he wrote that.

In conclusion, there is no way Leon could have foreseen the specifics of his team's Borrego Cup three-peat over Rams Hill and de Anza. So was it wishful thinking, or confidence in his Resort team?

Full story in the Feb. 8 issue!