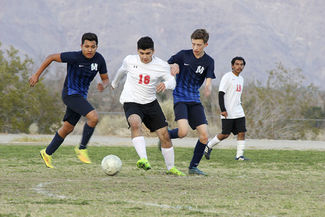 The Borrego Springs boys soccer team ended the regular season Feb. 15, but not in the way that they hoped.

The team was shut out by the Vincent Memorial Scots, 6 – 0 at home.

The Rams finished the season 6-14-2 overall and 1-5-2 in the league, putting them at fourth place in the Manzanita Soccer standings.

The Scots remained undefeated in the league and sit atop of the standings.

Signs were up along the bleachers for not just the seniors, but for the whole team, who worked hard all season.

To start the game, both sides were strong, aggressive and maintained control at a balanced pace.

A slick kick past the right side of Rams sophomore goalkeeper Brian Martinez put the Scots on the board first, 1 – 0.

The Scots attempted to score another one, but the Rams defense kept them away.

The Rams had a chance to answer back, but the free kick was blocked.

The Scots scored another goal with a corner kick to end the first half, and were up, 2 – 0.

Borrego struggled trying to get across the field, and were outshot, 9 – 1.

In the second half, the Scots didn't hold back and extended their lead with almost every chance they got with the ball. Rams goalkeeper Martinez was quick and dilligent at the goal with great saves and blocks.

It also doesnt' take away the good sportsmanship by the Rams and their push to not give up the game that easily. Forwards, midfielders and defenders were aggressive throughout the half.

Despite being shut out, the Rams walk away with lessons learned and many things to think about this offseason. They hope to work harder and come back as competitors and top contendors for the league championship.

The Rams will only be losing two seniors, and gaining a bunch of incoming freshmen for next year.