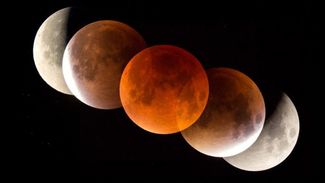 The Jan. 31 full moon is special for three reasons: it's the third in a series of "supermoons," when the Moon is closer to Earth in its orbit -- known as perigee -- and about 14 percent brighter than usual. It's also the second full moon of the month, commonly known as a "blue moon." The super blue moon will pass through Earth's shadow to give viewers in the right location a total lunar eclipse. While the Moon is in the Earth's shadow it will take on a reddish tint, known as a "blood moon." This is the first time in 35 years a blue moon has synced up with a supermoon and total lunar eclipse

Beginning 5:30 a.m. EST - Watch a live feed of the Moon on NASA TV and NASA.gov/live or YouTube

If you live in the western part of North America, Alaska, and the Hawaiian islands, you might set your alarm early the morning of Wednesday, Jan. 31 for a lunar trifecta: a pre-dawn "super blue blood moon."

"For the (continental) U.S., the viewing will be best in the West," said Gordon Johnston, program executive and lunar blogger at NASA Headquarters in Washington. "Set your alarm early and go out and take a look."

A lunar trio will be visible in the sky before dawn:

Blue Moon – The 2nd full moon in a month

Californians and viewers in western Canada will be treated to the total eclipse phase from start to finish, though the penumbral shadow will pass after the Moon has set. The umbral eclipse begins at 3:48 a.m. Pacific Time. At 4:51 a.m., totality will begin, with best viewing between about 5:00 and 6:00 a.m. local time. The totality phase ends about 6:05 a.m.

If you miss the Jan. 31 lunar eclipse, you’ll have to wait almost another year for the next opportunity in North America. Johnston said the Jan. 21, 2019 lunar eclipse will be visible throughout all of the U.S. and will be a supermoon, though it won’t be a blue moon.