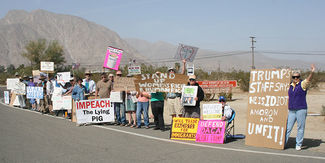 Week-after-week since the Women’s March back in January, they come every Sunday to Christmas Circle for an hour of protest. Drive-by honking and waving, plus vocal support, has risen steadily since that time from well below 50 percent support to around 80 percent of those expressing an opinion, according to participants.

What began as a protest aimed squarely at President Donald J. Trump has since expanded to an entire Administration; there are now fears that our fundamental democratic principles across the spectrum of government are increasingly at risk.

“People need to stand up for democracy,” says organizer Mike McElhatton, speaking for the group of about 25 protesters, “and our democracy is being shattered.”

The protesters say they will be back next Sunday at 11 a.m, and every Sunday, on the north side of Christmas Circle for an hour, o make their concerns visible and audible to Borregans walking or driving by.

Full article in the Feb. 22 issue of the Borrego Sun.