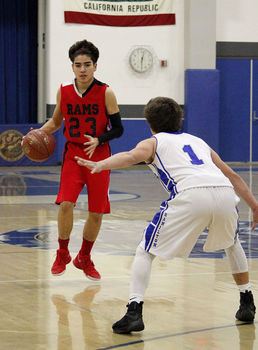 Turnovers upon turnovers played a key factor in the 43 – 23 loss for the Borrego Springs varsity boy's basketball team against the Hamilton Bobcats Jan. 3.

"We were a little undermanned, only five guys out there playing. They were able to keep up for three quarters, but just lost it in the fourth because they stopped communicating with each other," head coach Mauricio Polanco said. "Other than that, I was very proud of them. They played really well, above themselves, and that was good."

Against the Bobcats, the Rams set a slow pace, putting pressure early in the game.

Midway through the first quarter, the Rams were down just one, in a fairly low scoring game, 5 – 4.

With less than 30 seconds on the clock, the Bobcats hit a corner three and a jumper to take a six-point lead, 10 – 4.

Rams' junior point guard Fernando Alcaraz shot a three from the left as time expired, which gave the Rams huge momentum, and only a three-point deficit, 10 – 7.

The second quarter started with behind the arc shots from both teams.

The Rams managed to get within one midway through the quarter, 14 – 13, after a shot by Alcaraz, however, little mistakes gave the Bobcats an opening to take a 19 – 13.

Senior power forward Miguel Barron hit a jump shot in the paint to cut the deficit, but was answered right back by a Bobcat layup to end the first half, 21 – 15.

The third quarter was slow from both ends of the court with the Rams falling apart towards the end.

The Rams only scored once in the third quarter, struggling to get a shot up. The Rams allowed just seven points, but were still down, 28 – 18.

The Bobcats started the fourth quarter with back-to-back steals and layups to push their lead to 32 – 18.

However, the Bobcats went on a strong 4 – 0 run and held the Rams away from the basket with three minutes left in the game.

A free throw by Rams senior forward Oscar Fuentes and a steal by senior shooting guard Sam Moore was all the Rams could get offensively. The Bobcats connected easily with the basket, and were up 43 – 23.

The Rams pushed and never gave up, but it wasn't enough.

"Free throw shooting let us down, we did very poorly on that, so we need to get back in the gym and keep practicing," Polanco said.

He also hopes that the injured players will return to add more depth for the upcoming games.

"We need to be better defensively in all four quarters, so that area needs improvement," Polanco added.