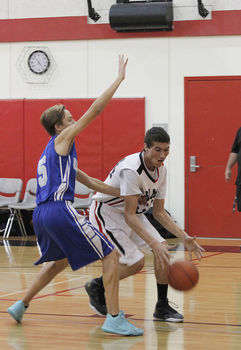 Compared to the first time these two teams met, it was a completely different ball game.

The Rams JV basketball team faced the visiting Hamilton Bobcats, who surely made up for that buzzer-beater loss the week before.

"We forgot to come out of the locker room tonight," head coach Tim White said. "We had slow starts, kids were not all there mentally and emotionally or connected to the game, but I'm still proud of them for giving 110%."

The first quarter of the game went off to a quick start with back-to-back shots from both teams to tie the game, but that was the closest the Rams got.

The Rams never led the game once, but that didn't stop them from giving it their all each quarter.

Rams sophomore point guard Ty White drove through the paint for a layup to make up for the Bobcats back-to-back shots, but was quickly answered by a three-pointer.

The Rams were down 16 – 9 heading into the second quarter.

Another slow start by both teams, who showed a ton of pressure on defense, and midway through the second, the score was 20 – 13.

Hamilton then found a weakness in Borrego's defense, going on a 6 – 3 run, and it seemed as if they couldn't miss.

Rams junior point guard Fernando Alcaraz hit a shot behind the arc to stop the bleeding from their run, but the Rams were down 36 – 18 at the half.

The third quarter of the game was a rough one for the Rams, who only scored four points – an over under layup by junior power forward Victor Arias and two free throws by junior center David Brathwaite, 54 – 22. The Bobcats went on a huge run for a comfortable lead.

Despite the score, the Rams held it together, and managed to outscore the Bobcats, 13 – 7, in the fourth quarter.

"I felt good about our energy, our communication, about taking care of the rock in that fourth. I'm proud of them for letting go of what the fourth quarter looked like and going out there, playing like it was tied."

The Rams started off strong, and took control of the fourth quarter.

The team put up a technical free throw from a Bobcats violation and four consecutive layups, 54 – 32.

Midway through the fourth, the Bobcats finally put up a few points on the board.

Despite the Rams efforts, it was not enough, as the deficit was too great to catch up.

The team is back in action on the road at Vincent Memorial Friday Feb. 2. Tip-off is at 3:30 p.m.