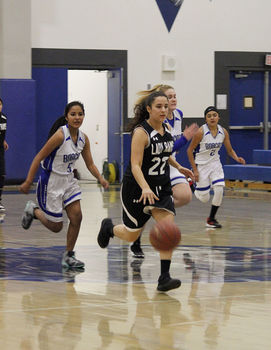 After a two-week break, the Borrego Springs Lady Rams basketball were back on the court to face the Hamilton Bobcats in Anza Jan. 3.

With a few second half mistakes and giving the opportunity for shots, the Lady Rams fell short, 39 – 33.

"It was a good return after two weeks off. Coming back after the holiday's is always a tough transition for the girls," head coach Justine Smiley said.

"Of course you always wanna come back with a win, with the deficit of six, that's a game in our control. Now we have to get back to the gym and start practicing to fix those little holes."

The game against the Bobcats, started slowly, until Lady Rams' freshman point guard Marla Manzano breaking the Drought with an up-and-under layup. Her shot was quickly answered back.

The Lady Bobcats managed to find open shots and took the lead 10 – 8, to end the first quarter.

The Lady Rams went into the second quarter aggressively, putting up shot after shot and were up three, 18 – 15, at the half.

The Lady Rams defense began to fall apart, giving the Lady Bobcats the advantage to push the lead to as much as six.

Midway through the fourth quarter, Manzano and Garcia put up a jumper and a layup to cut the deficit to four, 36 – 32.

But shots were forced, and the lack of defense showed, as the Rams could not pull it out.

"We need to work on free throws and stamina. When hitting that fourth quarter, the girls get gassed, so we have to build that back up so we can last the full four quarters," Smiley said.

She also expects the bench players to step it up more and help out.

The team faced the Bobcats again Jan. 9, which took place after print.

The team is back on its home court at 4:30 p.m. Jan. 12 against Victory Christian Academy.