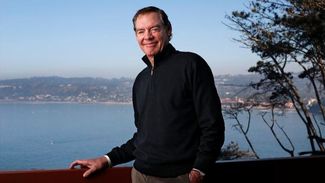 The San Diego Union-Tribune has written a piece about Jack McGrory, and it is a great read.

McGrory's legacy, especially regarding the Chargers and a $2 billion city pension debacle, is still hotly debated.

Even after leaving City Hall, McGrory has wielded great influence by serving on boards and leading civic projects

Once strapped for cash, McGrory now lives in a French-style chateau with an ocean view. His portfolio includes thoroughbreds, a tennis team and a Borrego Springs resort.

McGrory can-did almost everything. His six years as city manager, from 1991 to 1997, were among the most consequential and controversial in San Diego history. Since then, he's done everything from opening discount stores in Central America to raising funds for San Diego's Mainly Mozart festival.

Now 68, he's back in the public eye, backing a proposal to refashion the SDCCU Stadium site as a satellite San Diego State University campus. While a rival plan is built around a professional soccer arena, McGrory insists his option is best.

Economics is central to McGrory's legacy. Critics blame him for two costly boondoggles: the city's ticket guarantee deal with the San Diego Chargers and the city's pension crisis. Even 20 years after McGrory's departure, some in City Hall still use his name as an epithet.

Yet McGrory also inspires great loyalty. Donna LeGrand, his assistant, has been with him for almost 40 years. Republicans like Jerry Sanders, the former mayor and police chief, and Democrats like Vargas are fans who insist he's unfairly blamed for others' missteps.

Bruce Henderson, a former councilman and frequent sparring partner, doesn't agree. And yet...

John R. McGrory Jr. grew up in a working-class Boston suburb, on a street that had been home to McGrorys since the 1850s. His parents urged all five of their children to attend college, and all five did.

Jack, the eldest, attended Colgate in upstate New York. A classics major, he was schooled in government and politics by his second cousin - Mary McGrory, then a columnist for The Washington Star and later for The Washington Post.

An internship on Sen. Ted Kennedy's staff ended in 1971, the year he graduated, when he received his draft notice and enlisted in the Marine Corps. Too tall to squeeze into a cockpit - aviation was his first choice - McGrory went to Quantico, Va., to train as an infantry officer.

After tours of duty in Japan and the Philippines, he arrived at Camp Pendleton, where the rifle platoon commander was part of the security detail for President Richard Nixon's San Clemente residence. In November 1974, 1st Lt. McGrory was honorably discharged.

Having married an Ocean Beach woman, McGrory was eager to stay in Southern California. He applied for a City of San Diego job, and was hired as a personnel department trainee for $600 a month. From day one, Jan. 5, 1975, he aimed for the top.

"If you really wanted to drive things, get things done," he said, "the city manager's office was the place."

He had a weakness for big projects with big price tags, argued Henderson.

"Jack is hard-working, bright and a wolf in sheep's clothing," he said. "The bottom line is that Jack seemed to have been a big-government guy who believed that the owners of sports franchises were quite appropriately funded with public money when it came time to build their stadiums."

As city manager, part of McGrory's job was to fund the pet projects of the mayor and City Council. Yet San Diego lacks two commonly used taxes - a utility tax and a fee to cover the costs of garbage collection.

When the city campaigned to host the 1998 Super Bowl, there were more financial demands: a $78 million remodeling of the Mission Valley stadium named for San Diego Union sportswriter Jack Murphy. The city offered $60 million, then let McGrory find the other $18 million.

Irwin Jacobs, the co-founder of Qualcomm, made him an offer: "Change the name of the stadium from Jack Murphy to Qualcomm, I'll write the check for $18 million."

Managing the Chargers was an ongoing challenge. With other teams leaving their home cities for more lucrative deals elsewhere, McGrory and Mayor Susan Golding were keen to extend the Chargers' lease. As an enticement, the city guaranteed the Chargers would sell 60,000 tickets to every game, with the city covering any gaps in sales.

After McGrory left the city manager's office in 1997, all Chargers home games were televised, further diminishing the team's performance at the box office. Before it was dropped in 2004, this deal cost the city roughly $36 million.

An even more expensive crisis grew out of McGrory's 1996 decision on employee pensions. With the stock market booming and pensions fully funded, McGrory assured the council the city could contribute less - to a degree.

"There was a guarantee," McGrory said, "that the city would never let the funding drop below 82.3 percent."

But as the council decreased contributions, it increased benefits. The markets slowed, funding plunged below the agreed-upon floor, yet no balloon payment was made. Instead, the gap between funds and obligations grew to exceed $2 billion.

A 2006 independent audit blamed this fiasco on pension board members, the city council and McGrory. The city manager, the Kroll Report said, understood "that the proposal would shift current pension costs onto future taxpayers."

By then, McGrory was long gone from City Hall. He had resigned in September 1997, going to work for entrepreneur Sol Price as president and CEO of Price Enterprises Inc.

He's always been lucky, but the chance of this poor kid from South Weymouth, Mass., would become a wealthy La Jollan was a long shot. As an assistant city manager 30 years ago, McGrory couldn't pay his bills without raiding his retirement fund and selling vacation time back to the city.

His financial turnaround, McGrory said, was thanks to Price. For more than 20 years, McGrory held senior posts with Price Enterprises, Price Legacy Corp., the Price Group, Price Charities and PriceSmart. McGrory has significant shares in the latter company, which owns 41 discount warehouse stores in Central America, the Caribbean and Colombia.

"Sol loved him," Sanders said. "And Jack is a lot like Sol."

For years, he's been a go-to guy among local movers and shakers. When Padres President Larry Lucchino was diagnosed with cancer while Petco Park was under construction, the ballclub hired McGrory to keep that project on track.

"You've got to appreciate his energy, his work ethic and his decisiveness - he has all of those in full measure," said Lucchino, who recovered and went on to become the Boston Red Sox's president. "He's a guy who relishes decision making and wants to get a lot done during his time on this earth."

His time is fully booked. As CEO of La Jolla MJ Management, he's involved in dozens of real estate deals. On a cool winter morning, he stepped away from an office desk buried under essays - the final exam for a labor law course he teaches at State - to embrace a visiting grandchild. (He has four, with a fifth on the way.)

His calendar is full of board meetings and campaign strategy sessions for that Mission Valley campus. But he plays hard. A tennis fan, he's part owner of the San Diego Aviators tennis team. He travels to Dublin, Moscow and other foreign destinations with his third wife, Una Davis.

How to sum up the McGrory Legacy?

"I'll let other people decide that," he said.

Full article can be found: http://www.sandiegouniontribune.com/lifestyle/people/sd-me-mcgrory-profile-20171213-story.html