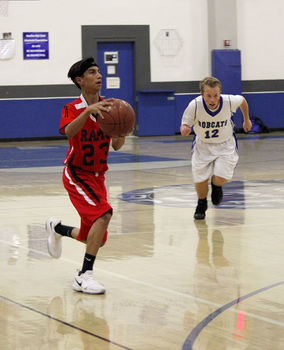 With five seconds left in the game and down by one, Rams junior point guard Victor Arias pulled up at the top of the arc and swished in the game winner for the JV basketball team against the Hamilton Bobcats Jan. 3, 46 – 45.

"I'm not sure if I've seen a court storm at an away game before, but I'm proud of our kids for working as hard as they did," JV head coach Tim White said. "They hung in there. With our five against their 11, they pushed it out. Huge props to them (Hamilton) because a few of their players just couldn't miss."

This was JV's first game of the season.

The Rams hoped to carry the momentum from the win against Mountain Empire Jan. 5 in their first home game of the season. They did. The team defeated the Red Hawks 46 – 39.

In their first game against the Bobcats, the Rams kept it close. With one shot, it was answered right back, either to tie the game or for the lead.

With a ton of back-and forth shots in the first and second quarter, the game was tied by halftime at 20.

The third quarter was a rough one, as it looked as if the lead was slipping.

The Bobcats took advantage of turnovers and little mistakes by the Rams.

With less than four minutes on the clock, the Bobcats hit a three and a jump shot in the paint to tie the game. In the last three minutes, all shots made were three-pointers, but the Rams stayed in a three-point lead, 34 – 31.

It all came down to the fourth quarter. With the game as close as it was, no one was certain which way the score would go. The Bobcats continued to put the pressure on the Rams.

With 3:27 left on the clock, Bobcats sophomore point guard Adam Carillo put up back-to-back layups to tie the game at 39.

Layups and jumpers on both sides of the court, with a slow down in the Rams defense, the Bobcats took a two-point lead, 45 – 43, with less than 20 seconds left. This was their first lead since mid-second quarter of the game.

With the shot clock off, all the Rams had to do was tie it up and force overtime. White drew up a play during the timeout expecting the Bobcats to press like they throughout the game, but they didn't.

"We weren't necessarily going for a three and the win, but it's crazy how it worked out," he said.

Sophomore power forward Andres Reyes drove through the paint, and found a wide-open Arias, who had a hot hand all game at the top of the arc. Swish. Game over. Rams Win.

"It was nothing but net, incredible," White said.

Even with the win, there is always something to work on, White said.

The team faced the Bobcats again at home Jan. 9, which took place after print.

The JV Rams basketball team will be back in action Jan. 23 at Mountain Empire.