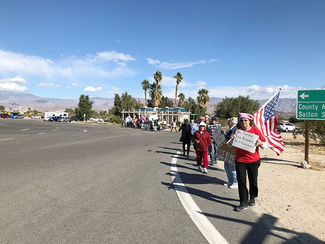 Thousands of demonstrators filled the streets across the United States, and multiple countries for the second consecutive year, for the 2018 Women's March Jan. 20. This comes a year after millions turned out to march in protest of President Donald Trump's inauguration.

Around 50 – 60 people in Borrego Springs participated in the movement, as they held a rally around Christmas Circle, led by Margaret Schuessler.

Women coordinated, marched, and came together as one at these mass rallies, which attracted thousands of participants in many cities, towns, and suburbs in the United States. Attendees called for women’s equality and rights, and urged supporters to voice their opinions by voting in the upcoming midterm elections.