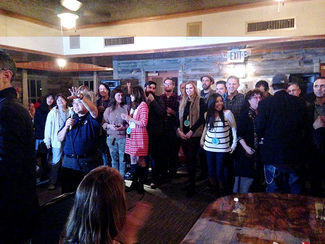 Many filmmakers, screenwriters, and actors showed up at the Saturday night midpoint in the festival, where Fred Jee held forth, congratulating them all for their participation. They introduced themselves and their films to an appreciative audience of film- and party-goers.

With regards to the first Borrego Springs Film Festival (BSFF) showing Thursday, Jan. 11, it's safe to say that you don't know her, nor will you ever travel to see her. But there she waits patiently, day after day, year after year. She dwells in western India, and she has been there for as long as water has flowed 134 kilometers from mountains through forests filled with unique plant and animal species, not to mention interesting people, down through central plains into a vast estuary, and finally out into the Arabian Sea. She is both the narrator of the documentary film named after her, Aghanishini, and the river itself.

And the last film, the campy western Cataract Gold, has at least one location that local Borregans WILL recognize, because some of it was shot in Borrego Valley.

In between Aghanishini and Cataract Gold were 58 films – features, shorts, animated, and Latino – that had 16 sold-out or nearly sold-out 2-hour blocks of showings from Jan. 11-15. Some of the filmmakers themselves traveled to Borrego for the festival, adding insights during the audience Q & A feedback sessions following each of the 16 blocks. There were also interesting panel discussions, where filmmakers and screenwriters talked about their film experiences and even showed some of their works on a small screen.

All the filmmakers were all vying for recognition, and that came both from audience appreciation after their film was shown as well as at the Awards Ceremony at La Casa del Zorro. And the winners are....

Of course, there were parties, too. Opening night at de Anza Country Club, where folks got their first intros to several of the attending filmmakers; the Saturday night party at the Palm Canyon Hotel where All Festival Pass holders got to mingle with the filmmakers and actors over appetizers and drinks; and the closing Awards Ceremony at La Casa del Zorro where everyone celebrated the award winners and a very successful festival.

Festival organizer was none other than Fred Jee (aka "The Padre" to those filmmakers who were part of his well-guided flock). Fred started working on this festival LAST January; kudos for such a fine festival.

Details in our Jan 25 print issue.