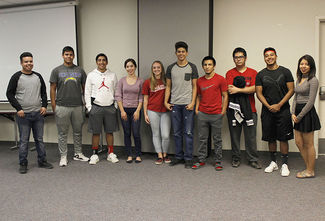 Athletic director and head coach Tim White acknowledged those who attended the banquet, and recognized the hard work the coaches have done, as well as the athletes for an amazing season in their respective sports.

The San Diego Union- Tribune All-Academic Student Athletes of The Year for fall sports were honored to begin the awards. These athletes are any juniors or seniors with a 3.0 GPA or higher on a 4.0 scale.

JV volleyball coach Ben Schmedeky announced the Rookie of The Year, Coaches Award, and MVP of the team.

ROY went to freshman Celeste Fernandez, and the Coaches Award was given to freshman Aide Valdez, who worked hard everyday, and had the biggest improvement of any player.

Varsity volleyball coach Rick Rethoret added that she was very committed and always put in the effort.

Junior Ana Fuentes was honored as the MVP, who served as the quarterback of the team, and always showed how she made the team better. Fuentes played on both the JV and varsity team.

"I am honored to coach them, and honored you trust me for helping them," Rethoret said, as he thanked the parents.

The varsity Rookie of The Year award went to freshman Marla Monzano, who always tried to excel in everything she was put into.

Defensive Player of The Year was awarded to senior Nicole Del Bono, who was moved from an outside hitter to defensive specialist this season.

"She is absolutely amazing, and had an eye for playing this defense," Rethoret said. "She is one of the best defensive specialists I ever coached and became an amazing attacker."

The Coaches Award went to senior setter Mariana Arias, who was the backbone of the team, and was someone everyone could lean on.

Junior outside hitter Camilla Hernandez earned the MVP award with her powerful hitting, and Rethoret said she has the chance to be recruited to play at the college level. Hernandez was also voted to First-Team All-League.

After a slideshow made for volleyball's season, White acknowledged the football team.

"These kids played amazing, and were one of the best teams to coach, and staff to work with," White said. "They worked hard top-to-bottom for a great season."

With a lot of first-year players this year, it was the start of rebuilding, but the team worked hard.

Sophomore Octavio Delgado earned Offensive Lineman Player of The Year. White mentioned that Delgado went over the edge and did a lot at the game against Julian, and knows he will be a great player for the next couple of seasons.

Junior Lucas Morales earned honorable mention for All-League. He is a continuous driving force and is a leader, and as White said, without him, the offense can't go.

The workhorse of the team, Justin Lopez, earned First-Team All-League, and was also nominated as Player of The Year.

"He is a leader, and 'Yes Sir' type of guy. Miggy is a mentally, physically, emotionally strong guy," White said.

Junior Juan Carmona was nominated for Kicker of The Year in the conference and Special Teams Player of the Year with a great leg.

A leader on and off the field, and always on the ball when it was needed.

White closed the awards with a football slideshow, and thanked everyone for their support all year.

Congratulations to all the fall athletes for all the hard work this season.