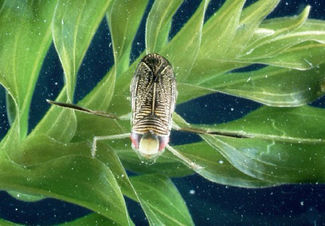 We are afraid, very afraid.

Not of the actual non-biting bugs themselves, called Water Boatmen, arriving of late from the Salton Sea in Borrego via what is called an "irruption," but the mess they have caused in pools and on cars. And if you happen to have a dark-colored pool bottom or a dark-colored car, it's even worse.

"It's been a nightmare," Clint Brandin, proprietor of Borrego Pool Supply, said. He's been in the pool business for 25 years, 13 in Borrego, and has never seen anything like it. "I went out on 62 calls within a 2-day period," he said, the irruption affecting nearly all of his customers to one degree or another; indoor pools are for the most part unaffected. One outdoor pool had to be drained completely, and others where filters had to be thoroughly cleaned.

Water Boatmen, so named because of their oar-like legs, grow up to half an inch in length, but are primarily algae eaters. The Salton Sea has plenty of algae on which they feed.

For pool owners, that would seem to be a plus...if there weren't so many of them. And according to Brandin, they seem to prefer dark-colored pool bottoms and, surprisingly, dark-colored cars.

The Water Boatmen hail from the Salton Sea region, and there are many factors possibly in play as to their numbers and persistence: Sunny or cloudy skies; seasonal temperature variations and sudden temperature changes; ever-increasing salinity (although they can survive in very high salt concentrations), and declining fish and bird populations serving as predators.

Out at the Salton Sea, the numbers of bugs decrease on cloudy days, according to volunteer park aid Carlos at the Sony Bono Wildlife Refuge.

There are chemicals (algaecides) that can kill the bugs in pools and spas, and even small amounts of mild dish detergent can form a thin barrier on top of the water to prevent the bugs from resurfacing (be very careful with this method – ask a pro), hence they die off and either settle to the bottom or get strained by the filter.