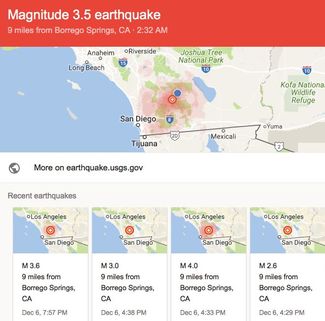 A series of earthquakes were recorded in the San Diego County area, less than 10 miles from Borrego Springs, Wednesday Dec. 6 and Thursday Dec. 7.

The first tremblings of a magnitude 2.6 was felt at 4:29 p.m., according to the United States Geological Survey. Immediately after at 4:33 p.m., a magnitude 4.2 quake was felt. Both occurred nearly 10 miles beneath the earth's surface, near the Earthquake Valley fault, one of the most active systems in Southern California.

There are no reports of injuries or damages at this time.