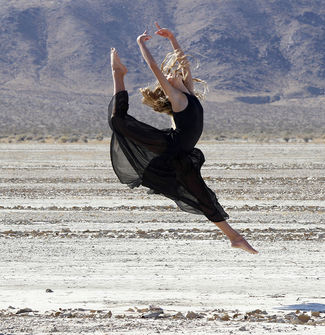 With the sun beaming down at Clark Dry Lake, members of Chamber Bravura, who were dressed elegantly in black, began to shoot their first music video Dec. 2.

Approximately 30 members of the choir, ranging from ages 11 – 17, were excited for the intense filming of the video.

Music producer and director Steve Wetherbee, who has produced videos for MTV, decided to shoot the video at Clark Dry Lake, as he "envisioned a desert," similar to Pentatonix's video of "Hallelujah."

"He immediately thought of Borrego, and it was pure coincidence that I live and work here," Katherine Girvin said.

Girvin, principal of Borrego Springs High School, has been the choir director since 2009.

The song chosen was "You Ruin Me" by The Veronicas, and the first time the chamber heard it, there was an instant connection.

When the chamber was in Sydney, Australia, they were approached by someone close to The Veronicas, who are a Sydney-based group.

Skyla Rayne, 17, soloist of the group, and has been singing professionally since she was 10, recording in studios around Hollywood.

Rayne said the best part of being in the chamber is the education aspect.

"I've always been pursuing me as a soloist, but in chamber, I've learned to work a lot with others, with direction, chorale music, and music theory," she said.

Chamber Bravura is an extra-curricular vocal performance organization composed of vocalists from various middle and high schools from around the San Diego County.

They started as an a Cappella group from the local middle school, after they performed in a prestigious national middle school choir concert in Carnegie Hall.

Since their formation, they have been invited all over the world to perform in many highly regarded performance venues.

Borrego Springs' very own Dennise Cecena, 17, is in her first year of chamber, and is honored to be a part of the group.

Cecena said being in a serious music video is intense, but said, that filming in her hometown is an "amazing and unexplainable feeling."

As music plays a significant role in each of their lives, it creates an emotional connection when you're literally on the same vibration as the other.

Olivia Kuykendell, 16, said, "It's kind of the closest thing to magic. It's more of a feeling than a sound and it's the most impactful thing in the world."

"They work really, really hard and I'd love to share their passion with the world, and I know The Veronicas can help with that," Girvin said.

There is no timetable as to when the video will be fully completed or released, but Girvin said she will share it once it is ready.

"We are deperately trying to raise money for the kids to send them to NYC and Iceland. We are a 503c, so if anyone in our community wants to help, they can email me at kgirvin@bsusd.net."