Rams Football Closes Out Season With A Win 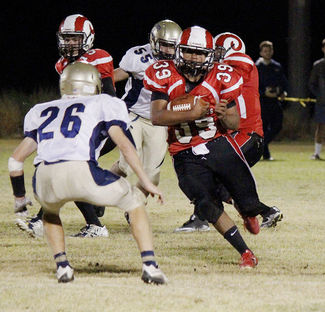 "Wow," head coach Tim White said. "They're going to be missed, it's bittersweet. You love them to death, you coach them up, and it's going to be hard to replace them."

Even with the win, the team is unfortunately out of playoff contention. The team finished the season 5-5 overall, and fourth place in the Citrus League 8-Man football standings with a 3-3 record.

"Well, 5-5. The good, bad, and the ugly. I wish we could've won a couple more of those close games right there, though, I'm so proud," White said. "Today we did better at managing the peaks and valleys. We didn't get too excited, we didn't get too down, the kids kept fighting back. I'm super proud of our seniors and our team."

Junior offensive lineman Lucas Morales squeezed through the middle for a Rams touchdown, and with a successful extra-point, put the Rams on the board, 7-0.

With 5:05 left on the clock, the team extended their lead over the Crusaders with a six-yard rushing touchdown by Lopez to make the score 14-0.

The Crusaders answered right back with a big 43-yard rush down the right side by junior quarterback Joseph Lisiecki, and with an extra-point by freshman kicker Declan Kerekes, cut the lead, 14-7.

In the second quarter, the Crusaders chipped away, after converting a fourth-and-short on the 42-yard line, but with a no good extra-point, the Rams were still in the lead, by one, 14-13.

Things continued to go the opposite way for the Rams, after a short kickoff returned was recovered by the Crusaders, leading up to a touchdown. But another no good extra-point, the Rams still trailed, 19-14.

With 2:37 left in the second quarter and the first half, Lopez rushed for three yards for his second touchdown of the game. The extra-point was blocked, but the Rams led 20-19.

In the third quarter, the Rams managed to score another touchdown, but attempted a two-point conversion, which was unsuccessful, though, were up 26-19.

The fourth quarter both teams went back-and-forth, racking up the score on the board.

With 3:25 left in the fourth quarter and the game, the Crusaders scored a 35-yard touchdown with a long pass down the middle, 38-26.

The Rams answered right back, as Lopez broke past two linemen on the left side to score a touchdown. With a successful two-point conversion right down the middle, brought the score to 46-26.

The Rams ran the clock, and that was it, a win.

Full story can be read in the Nov. 16 issue of the Borrego Sun.