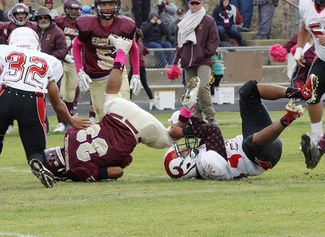 The Borrego Springs High School football team were outworked in the second half by the Julian Eagles, which resulted in a 28-6 loss, Oct. 20.

"I'm so proud of my kids. They all worked hard, and pushed through. Unfortunately, we didn't get the result we wanted, but I'm proud of them," head coach Tim White said.

"We were the underdogs and we came up, gave them a heck of a battle, and overall it was a great game."

The Rams also faced the Ocean View Christian Academy Patriots Oct. 27, for their last away game of the regular season, and lost 55-8.

Going into the game against Julian, the Rams were up against a well-stacked team, who posted at least 30 points or more against their opponent. However, the Rams did a great job of holding them to just six points by the half.

With 11:46 on the clock, junior quarterback Shane Cranfield found senior running back Osvaldo Martinez wide-open down the middle for a 7-yard touchdown. The Eagles attempted a two-point conversion, but were unsuccessful, making the score 6-0.

In the fourth quarter, with 10:39 on the clock, Martinez broke past three Rams defenders on the outside for a 49-yard touchdown.

Julian once again attempted a two-point conversion, but were unsuccessful, as Borrego found themselves down, 12-0.

On the Rams next possession, running back Justin Lopez had a huge run gain for about 20-yards. With 6:33 on the clock, junior offensive lineman Lucas Morales pushed through the middle for a touchdown. The Rams also attempted a 2-point conversion, but were stopped short a the 1-yard line, 12-6.

The Rams hit the field at home for their last game of the regular season at 7:00 p.m. Friday Nov.3 against St. Joseph Academy.

"It's senior night, and it's a big game for our guys," White said. "We're gonna try to come out on top, we're gonna keep pushing, and hope to get a big W against St. Joseph."

*Full story in the Nov. 2 issue of the Borrego Sun