The Journey of the Anza-Borrego Desert Region Guidebook 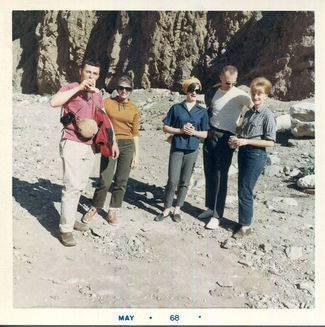 Wilderness Press has just released a new 6th edition of the area guidebook entitled Anza-Borrego Desert Region: Your Complete Guide to the State Park and Adjacent Areas of the Western Colorado Desert. The first edition of this guide was originally published in 1978.

The Lindsays will have their book launch for the new edition at the Park Visitor Center on Sunday, November 19, from 2-5 p.m., with a presentation at 3 p.m. telling how this book came about and how this new edition is different from the previous editions. Their first presentation in the San Diego area will be Wednesday, November 29, at 7 p.m. at Adventure 16 Outdoor Retailer in Mission Valley with a “Happy ½ Hour” preceding the presentation. Other presentations are scheduled through the desert season, which include REI, Sierra Club, and the Borrego Springs Art Guild.

That first visit to the Anza-Borrego desert set a new course in the lives of the Lindsays. Lowell first saw the vast desert preserve while flying a helicopter during US Navy training missions over the area. In 1967 he brought a reluctant Diana to the desert who thought there was nothing there because why else would it be called a “desert?” Each successive trip introduced a new aspect and delightful surprises that continue to this day.

While Lowell served in the Navy, including two tours to Vietnam and as a Navy Survival School Instructor at Warner Springs, Diana attended San Diego State University researching and writing her Master’s Thesis in history and geography, which was subsequently published by Copley Books (a division of the San Diego Union-Tribune Publishing Company) as Our Historic Desert: The Story of Anza-Borrego Desert.

After his Navy career, Lowell worked for the YMCA in Orange County, during which time Diana and Lowell spent their free time exploring the Anza-Borrego desert. It was then that they became aware that the only guidebook for the area was old and that the author Horace Parker had no intension of updating it. They began working on their own guidebook and convinced Tom Winnett, publisher of Wilderness Press, that he should publish a guide to this desert area in 1978.

Desert explorations over the many years have led to several award-winning books that the Lindsays have written or edited, including: Anza-Borrego A to Z: People, Places, and Things; Marshal South and the Ghost Mountain Chronicles; Fossil Treasures of the Anza-Borrego Desert: The Last Seven Million Years; Geology of Anza-Borrego: Edge of Creation; Geology and Geothermal Resources of the Imperial and Mexicali Valleys; Ricardo Breceda: Accidental Artist; and Coast to Cactus: The Canyoneer Trail Guide to San Diego Outdoors.

Diana has served as a board member of the Anza-Borrego Foundation for almost 30 years and served twice as president. In 2013 she was presented with the Medallion Award—the state’s highest honor for “superior achievement” in volunteer service. She is an honorary California State Park Ranger. She was also Grand Marshal of the Borrego Days Desert Festival Parade in 2016 and received a resolution from the San Diego County Board of Supervisors acknowledging her contributions to this desert area.

Lowell received his master’s degree from West Texas A&M in political science, specializing in environmental education. He worked for years as a YMCA executive director and managed Camp Marston and Raintree Ranch in Julian, California. He is past president of the San Diego Association of Geologists, served as treasurer of the national Association of Earth Science Editors, and is an active member of the ABDSP Paleontology Society. The Lindsays own Sunbelt Publications, a regional book publishing and distribution company located in San Diego, California.

Former Park Superintendent Mark Jorgensen has called this guide “the bible for anyone thinking about visiting Anza-Borrego Desert State Park.” It is the guide given to new rangers to help them learn about the park. The Anza-Borrego Desert Region guidebook was written in cooperation with California State Parks, the Anza-Borrego Foundation, and BLM. A portion of the proceeds from the sale of the book are donated by Wilderness Press to ABF to help support the Park.