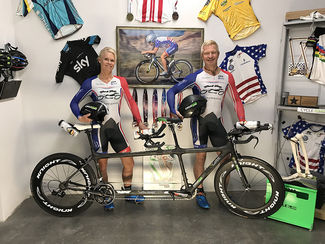 Scott Peterson and Julie Cutts are aiming to create a new record in the 6 hour section of this years RAAM 6 – 12 – 24 race being held in Borrego Springs. Having met in 2013 and fallen in love, Cutts had already achieved an astonishing career as a cyclists by herself. A mother of four, Cutts began competitive cycling at the age of 36. She is now a six times national champion and the power and drive behind the teams tandem challenge.

Peterson is the owner of Bend's CycleSoles. He's been a practicing Orthotist - a professional who designs orthopedics and sport insoles to alleviate pain, reduce injury, and improve performance - for more than 30-years; devoting his life to helping athletes of every skill level ride, run, and ski longer, happier, and healthier.

During the challenge, Peterson is in charge of navigation while Cutts drives the pedals behind on what they class as their secret weapon.

When Elijah Barrett pedaled up the road from his New Hampshire house on an October morning in 2006, he had much to think about. An elite high-school runner, turned competitive triathlete and cyclist, Elijah, then 31, and his new wife Janelle, had big ambitions. As a culmination to careers and lives dedicated to health and fitness, they had set a big, audacious goal: they would become World Champions for tandem cycling at the upcoming Time Trial World Championships.

Elijah and Janelle were mentally and physically ready. And more, they had a secret weapon. It was a sleek, fast, black matte tandem Calfee road bicycle hand-crafted to fit them like a glove. It hung in their garage in anticipation of the upcoming race. Elijah and Janelle dreamed about the mom