How To Break A Record – Attila Domos 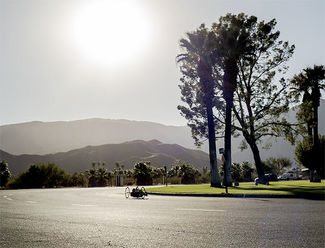 Despite having already unofficially broken the record for the distance covered by handcycling continuously over a 24-hour period, Attila Domos finds himself in the unenviable position of recreating the feet once again. This time with the Guinness Book of Records guidelines firmly covered.

A different challenge will face the accomplished athlete this time around. The desert heat is a lot different from his native hometown of Pittsburgh, however, he has spent the last few weeks in Borrego acclimatizing, thanks to the support and generosity of La Casa del Zorro.

The fact that this attempt will be made on public roads will hinder speeds to a certain extent, luckily Borrego Springs has nowhere near the amount of traffic a big city offers. The wind, the drop over night in temperature and physical and mental exhaustion, will all pose hurdles to overcome. Despite those obstacles, the main bone of contention standing between Domos and his success is the state of the roads.

Already suffering from training runs on the course, the low height of the hand-cycle and the prostrate position the rider has to lie in, means every bump, stone and dip causes the riders head to bounce constantly. Despite the injuries to hands, muscles cramping and a large dose of concussion, Domos remains upbeat and determined.

It isn't if he can complete the record, it is when he has completed the record, as self-doubt is not this man's vocabulary.

As many listened to 'Travels with Francois,' which was heard live from Borrego Days, Domos is intelligent, dedicated and as quick at cracking a joke as he is at proving that behind every theory lies a more intriguing conspiracy.

Helping him along on his journey are his willing support crew. The group is made up of his younger brother, long-term friends and a faithful sidekick in the form of Stefano Ceccarelli. Visitors to Borrego Days will have seen Ceccarelli perched on the back of a car wielding a camera, and letting his curly long hair float in the breeze. Not actually along for a bit part in a hair commercial, Ceccarelli is a sound man camera man and photographer for a film about Domos' record breaking attempt.

A few residents have witnessed him cycling to La Casa with a rope dragging behind him and Domos taking a break in his wheelchair while someone else does the pedaling for once.

Despite the fun the pair have had and the obvious affection they have developed for Borrego, there were times when it looked like the attempt was set to fail before it began. Luckily, two young staff members at La Casa were on hand to save the day. When the transport company tasked with delivering Domos' handcycle, failed to deliver on time, the boys volunteered to drive to the haulage company and take delivery themselves. No mean feat when you consider the size of the box they were willing to take charge of or the importance of the cargo.

The hand-cycle sits barely an inch off the ground, and proves quite an attraction when seen out on the streets. People are curious and Domos is happy to answer questions about his pride and joy. A rear view mirror allows him to stay aware of the traffic around him, and he is adept at maneuvering the contraption at speed. This doesn't stop people providing the same bit of advice wherever he goes, though.

Despite the skill and the aerodynamics required to race a hand-cycle at speed, the public rarely fail to miss the opportunity to declare that one thing is most definitely missing, "You should stick a flag on that".

Let's hope he just sticks a World Record on it.

To learn more about the extraordinary journey so far, visit http://www.attiladomos.com.