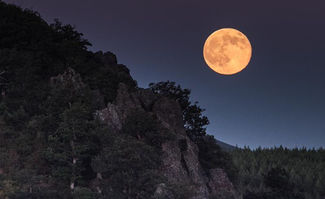 Not quite the supermoon, but many will love the beautiful and bright shining "beaver" full moon Friday Nov. 3 and Saturday Nov. 4, a day before the moon reaches perigee, its closest distance to Earth each month.

The Beaver moon gets its name because it came at the time of year when the early colonists and the Algonquin tribes set their beaver traps before the swamps froze. This would ensure they had a good supply of warm winter furs.

To be designated a supermoon, the moon must be full on the day it is at its perigee, or closest distance to the Earth, according to Space.com. This month, the moon will reach its perigee on Friday, missing the supermoon classification by just a day. But since it is still very close to Earth, it will appear bigger and brighter than usual. Only December's supermoon will be bigger.

With the winter season closely approaching, the moon will generally appear higher in the sky than it does in the summer for Northern Hemisphere skywatchers. As midnight approaches, the moon is nearly 60 degrees above the southern horizon, high enough to clear most buildings, even in skyscraper-heavy cities.

The bright moon will be in the constellation Cetus (The Whale), whose stars tend to be faint; even in a dark-sky location the whale would get washed out. The brightest nearby constellation is Taurus (The Bull), and only the very brightest stars (such as Aldebaran) can be easily picked out.

The only naked-eye planet that is up in New York with the moon will be Saturn, which stays low and sets at 8:16 p.m. local time. As the moon rises, Saturn will be 19 degrees above the southwestern horizon.

And don't forget to "fall back" on Sunday to end Daylight Saving Time.