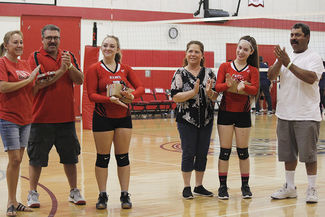 Prior to the game, senior’s outside hitter and defensive specialist Nicole Del Bono and setter Mariana Arias were honored with little gifts by head coach Rick Rethoret.

Rethoret also thanked the parents of the girls', for all their sacrifices, as well as their support throughout the season.

“Every year, I tell the girls, ‘We play to get a banner on the wall for our seniors,” Rethoret said. “Our two seniors are exceptional.”

In the first set, both teams continued to go back-and-forth, but the Hornets took advantage of the Lady Rams’ little mistakes to stay in the lead.

The Lady Rams then found some momentum, after a kill on the left side by Del Bono.

A long rally kept the crowd on its toes, and after a solid kill by junior outside hitter Camila Hernandez, brought the Lady Rams within two, 22-20. However, the Lady Rams were their own worst enemy, and gave up consecutive points, as the set slipped away, 25-21.

The Hornets pushed their domination in the second set, going on a 9-0 run.

With back-to-back kills down the middle by Hernandez, along with and a trio of aces by Arias, put the Lady Rams again within two. But with minor mistakes, the Hornets took the set, 25-15.

The Lady Rams never found themselves ahead. The closest the team got was after an ace by sophomore defensive specialist and libero Danielle Del Bono to tie the game at nine.

The Lady Rams managed to get within one, after going back-and-forth, but the Hornets were much more dominant, and sealed the game, 25-19.

“I thought we were better. We had some losses out of the blue that didn’t make any sense, and played exceptionally well at times. But it was inconsistent, and we just didn’t have the ammunition this year, but I’m still proud of these girls,” Rethoret said.