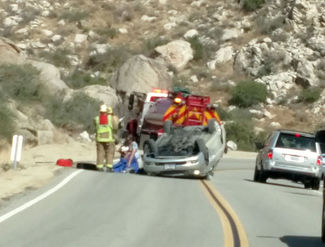 At around 1:10 p.m., units responded to an overturned vehicle on Montezuma Valley Road, near mile marker 11.5.

The elderly woman, whose name has not been released, was assisted out of the vehicle, and paramedics laid her on the ground as a precaution.

John Henry of Watts Solar, said the elderly woman was headed up the grade. One lane, going down, was open with slight traffic delays.

The cause of the rollover has not been determined or the state of the woman.