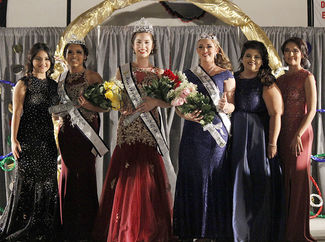 A large crowd filled the Borrego Springs High School's sports hall as regular emcee, Fred Jee took his place in the spotlight and began one of the towns most anticipated events. The black dropped stage did nothing to take away from the six contestants competing for the Miss Borrego title for 2017's Timeless Borrego Pageant Oct. 14.

Mariana Arias took the crown as Miss Borrego 2017. Arias, daughter of Jose and Norma Arias, hopes to attend the University of California San Diego to major in human biology to pursue a career as a pediatrician. Arias is heavily involved with clubs on campus, and is co-captain on the volleyball team.

Arias said she has worked very hard to lead her up to this point and is ready to use her reign as a stepping stone to make a change. "I feel like this is such an amazing experience that I'm about to embark on, and I'm really looking forward to it because I know I can make a positive impact on my community," she said, holding back her tears.

Yuridia Leal, first princess, is the daughter of Maria Leal, and plans to attend a four-year university in hopes of becoming an ultrasound technician.

Nicole Del Bono, daughter of Jose and Diane Del Bono, second princess, plans to attend Palomar College, and transfer to a four-year university, to pursue a career in zoology.