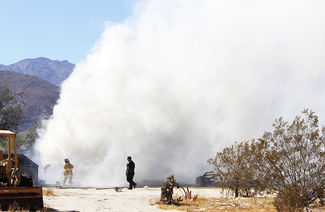 A little before 2:00 p.m. Friday Oct. 6, Borrego Springs Fire District Units responded to a vegetation fire in the back area of the Santiago Estates of Borrego Springs.

The source of the fire, according to Fire Chief John Hardcastle, Borrego Springs Fire District, appeared near the dumpster, and because of the strong winds, pushed the fire out to the ground level.

"The cleared out area around the debris kept the fire in place so luckily it didn't spread," he said.

The cause of the fire is still unknown. There were no injuries or property damages.

There had been a ton of debris – wood chips, and tree branches – in the area used as a storage for the mobile home park.

It took about an hour to put the flames out, however, smoke continues to be mild.

Elizabeth Rodriguez said she saw the flames while driving out of work, and called 911, who were already on the way.

"I could see the flames, and thought it was a house or a brush fire," Rodriguez said. "The smell of the smoke was very strong."

Crews will continue to douse the area for the next hour, in case of continued sparks.