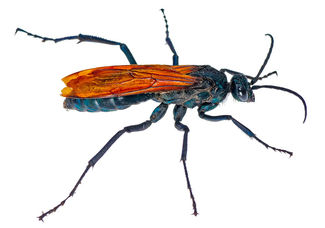 That's the advice given by the one man, who should know what he is talking about.

Entomologist Justin Schmidt, invented the Schmidt sting pain index, which ranks the pain of insect stings from one to four, and the shy, brightly colored Tarantula Hawk, is measured at a four. Along with bullet ants.

Capable of paralyzing a tarantula and dragging it off to a burrow, it lays an egg and leaves the larva to eat the living, paralyzed spider from the inside-out.

Howard Evans, the great naturalist and author of the classic book "Life on a Little Known Planet," was an expert on solitary wasps. Howard, a slight, reserved man with a shock of white hair and a sparkle in his eyes, was especially fond of tarantula hawks.

Once, in his dedication to the investigation of these wasps, Howard netted perhaps 10 female tarantula hawks from a flower. He enthusiastically reached into the insect net to retrieve them and, undeterred after the first sting, continued, receiving several more stings, until the pain was so great he lost all of them and crawled into a ditch and just sobbed. Later, he remarked that he was too greedy.