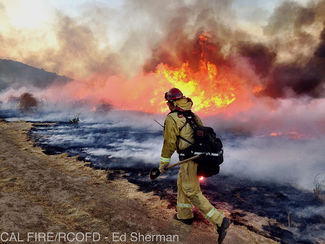 About 300 firefighters, seven air tankers and three water-dropping helicopters are fighting the Mias brush fire in the Riverside County, just north of Banning.

The burn area is estimated at 540 acres, with five percent containment, as of Tuesday morning. The fire had exploded from 10 acres to almost 600 acres in less than four hours. It is predicted the fire will be fully contained by Thursday Aug. 17.

The brush fire was sparked by a weakened tree branch from an active beehive that fell into the power lines Monday Aug. 14, according to the Cal Fire/ Riverside County Fire Department news release.

It was reported at 3:45 p.m. and smoke became visible throughout the San Gorgonio Pass.