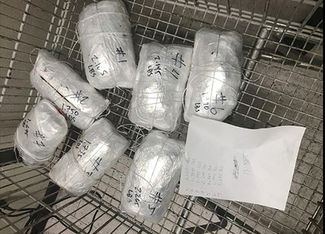 El Centro Sector Border Patrol agents at the Highway 86 immigration checkpoint arrested a man suspected of smuggling methamphetamine, hidden under the seats of his Nissan Maxima.

Following a primary inspection, a border patrol canine alerted agents and a secondary inspection was carried out on the 31-year-old's vehicle.

Agents discovered seven packages hidden inside compartments under the driver and passenger seats. The packages tested positive for methamphetamine with a combined weight of 13.48 pounds and an estimated street value of $47,180.

The suspect is now in Drug Enforcement Administration custody for further investigation.

Since fiscal year 2017, which started Oct. 1, 2016, El Centro Sector seized more than 1,109.48 pounds of methamphetamine, and fentanyl is also making it's way across the checkpoint.