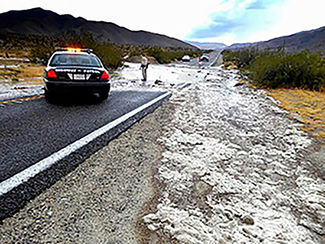 The National Weather Service in San Diego issued a flash flood and thunderstorm warning for Borrego Springs and the mountain areas Thursday, which were in effect until 8:00 p.m. Before reaching Borrego Springs, the storm hit La Paz County and the Imperial Valley, knocking down power poles, leaving residents in the dark.

A little before 3:00 p.m., the storm headed toward East Salton City at about 20 mph with another storm coming in South of the Ocotillo area at 12 mph. Hwy 78 at Yaqui Pass was also closed off for about 25 minutes due to flooding and drivers were diverted as a precaution.

Areas are back to having clear and sunny skies.