UPDATED : Homicide Suspect on the Loose 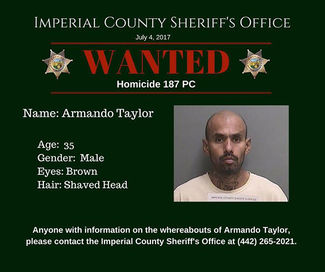 The last of four men who'd been sought in the slaying of a Salton Sea Beach resident is now in custody, after authorities caught up with him in Indio.

Armando Taylor, 35, was arrested Saturday after being on the lam for about two weeks following the death of 38-year-old Adam Walker, who was found July 3 with "numerous injuries'' to his upper body, according to the Imperial County Sheriff's Department. Walker was pronounced dead at the scene, in the 200 block of El Centro Avenue in Salton Sea Beach.

Three men -- John Taylor, 36, Edgar Gerardo, 46, and Michael Guerra, 33 -- were arrested shortly after Walker's body was discovered and booked on suspicion of homicide and conspiracy, according to deputies.

The sheriff's department had circulated Taylor's photograph in an attempt to locate him, while advising the public to not contact him if seen. Taylor was arrested Saturday by U.S. Marshals in an apartment on Sonora Avenue in Indio, according to Riverside County jail records.

Taylor's facing charges of conspiracy to commit a felony and felony murder with malice, according to jail records.

All four men were being held in lieu of $1 million bail.

An alleged murderer is on the loose and deputies are requesting the publics help in locating him.

Investigators are looking for 35-year-old Armando Taylor for his part in the murder of a 38-year-old man.

On Monday, July 3, the Imperial County Sheriff's Office was called to the 200 block of El Centro Avenue in Salton Sea Beach in reference to a dead person.

Medical crews pronounced the man dead at the scene and found numerous injuries to the upper torso.

John Taylor, Edgar Gerardo and Michael Guerra were arrested and booked into Imperial County Jail for Homicide and Conspiracy with a bond set at $1 million dollars each.

The fourth suspect Armando Taylor is still at large.

The victim has been identified by family as Adam Walker.

Anyone with information on Taylor's whereabouts is urged not to contact him, but to call the Imperial County Sheriff's Office at 442-265-2021.