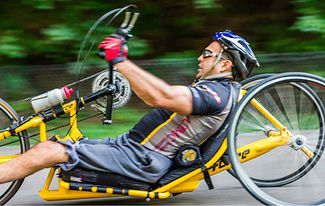 Attila Domos set an unofficial 24-hour distance record on a handcycle at a cycling track in Highland Park after traveling 407.7 miles, besting the 403.8 miles that earned Thomas Lange of Germany, a spot in the Guinness Book of World Records in 2009.

"Now I want the official record," said Domos, 49, of Squirrel Hill, who will be in Borrego Springs November for the 24-hour cycling marathon, 7 -12-24.

But Domos wont be turning up alone. A film crew will be joining him on the journey and have been chronicling his efforts to break the record in a documentary titled "Attila's Next Step."

Domos has been a paraplegic since 1993, when a rope he was using to help him descend from a ladder he had climbed, snapped. The fall left him paralyzed from the waist down.

"I was determined not to let my injury define me," he said. "I took up competitive powerlifting, pushrim marathons and then endurance handcycling."

Domos has finished first in the Great Race handcycling event three times, won the Pittsburgh Marathon handcycling competition in 2010 and won it again in May just a year away from turning 50.