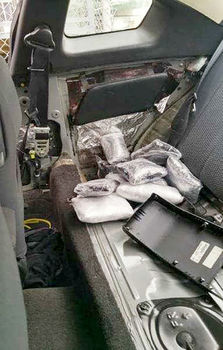 The incident occurred at approximately 4:30 p.m. when a 21-year-old man driving a black 2008 Nissan Altima approached the checkpoint and was subsequently sent to secondary inspection.

At secondary inspection, a Border Patrol canine team alerted to the passenger side of the car.

Agents then searched the Altima and soon discovered 12 bundles wrapped in cellophane and black tape in the rear passenger side-panel.

The contents of the packages were examined and tested positive for methamphetamine.

The total weight of the methamphetamine was 15.03 pounds with an estimated street value of $48,096.

The man was determined to be a United States citizen and was turned over to the Drug Enforcement Agency along with the vehicle and narcotics.