RAAM takes on the luck of the Irish 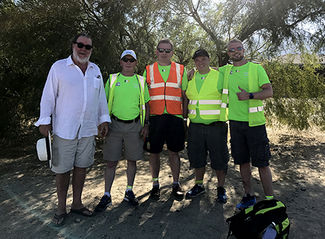 In 115f and no sign of a cool breeze, cyclists made their way through Borrego Springs and off towards Phoenix, to compete in the 2017 RAAM 'Race Across America'.

One pair of experienced riders are Irish duo Graham Macken and Declan Brassil, accompanied by a 10-person crew, and are aiming to become the first Irish team to complete RAAM.

Having no stages, the race is virtually non-stop, with teams swapping riders to take turns to compete. Individual competitors ride the whole race solo with up to 22 hours a day and a week of cycling in order to finish. The two-man, four-man and eight-man events can take just over five days to complete, however there is a time limit placed on competitors - nine days for teams and 12 for solo riders.

Between collisions with vehicles, equipment failure and sheer exhaustion facing all competitors, up to 50% of solo competitors have been known to drop out of the race en-route through some of America's most iconic landmarks.

Started in 1982, the race has yet to see an Irish duo complete the race. A challenge Brassil and Macken are keen to put right.

The men are aiming to complete the event in seven days and could be in contention to win it as teams drop out and fall by the wayside with on average, over half the two-man teams will fail to finish. Four years ago, Brassil was part of a four-man team that completed the event, while Macken was their physio.

The whole way across I kept saying 'I have to do it,' Macken recalls. "At the finish line, Declan said he could return the favour as crew, but I said I'd rather he cycle (with me)."

Despite missing out on the opportunity to compete in 2015, which saw Macken postpone his wedding, it was Brassil who caused the delay by participating in an alternative race when two dogs ran into a pack of cyclists that included the Irishman and he ended up breaking his collarbone in the ensuing crash.

The duo's official team name is Ardstone/Tayto Park LCRC after their two main sponsors and they are participating to raise funds for the Alzheimer's Society. No strangers to the winning post, their dream to finish and win can be helped by the pairs past success.

While taking part in 'Race Around Ireland', which is widely recognized as Europe's most challenging endurance event, not only did the pair compete, they broke the record for the two-man event.

When not competing, Brassil can usually be found working as a planning consultant in Dublin. Ireland, while Macken owns a Neuromuscular Therapy and Sports Injury Clinic in Trim, as well as a bike and run shop, Spun Cycles & Spun Run. In order to make their dream a reality, they have raised funds roughly amounting to €30,000 and taken time out of their respective jobs and away from their families.