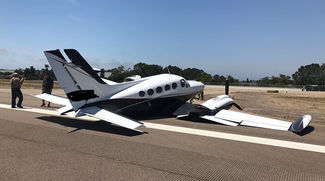 Although Meehan was not on board at the time, the accident closed Palomar airport for approximately five hours whilst emergency crew worked to remove the plane.

Out on its maiden voyage following mechanical refurbishment, the apparent cause is thought to be the loss of landing gear on touchdown.

There are no reports of any injuries. FAA are investigating. The pilot is quoted as saying "It was a beautiful landing. Nice and soft. Straight down the runway and then the plane just broke. It was crazy."