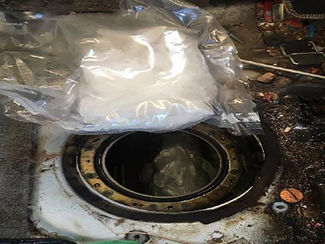 The incident occurred at approximately 11:30 a.m. after a 35-year-old man approached the checkpoint in a white Infiniti SUV.

At secondary inspection, the canine team alerted towards the rear end of the vehicle. Agents investigated further and discovered 25 sealed packages concealed in the vehicle's gas tank. The packages were examined and tested positive for the characteristics of methamphetamine.

The combined weight of the packages totaled 27.29 pounds, with an estimated street value of $87,328.

The man, a Lawfully Permanent Resident, was turned over to the Drug Enforcement Administration along with the vehicle and narcotics for further investigation.

El Centro Border Patrol has stopped a few similar smuggling schemes that utilized vehicle gas tanks in the past month. Cocaine and heroin was found in one gas tank and 67 packages of methamphetamine were discovered in another.