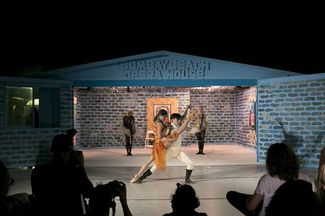 It was once a celebrity hangout in the 1950s and 60s, the location for water sports and decadence in the middle of the desert, but has since become a mass of disrepair. For two days, April 15-16 Bombay Beach welcomed back the fun and adventure from its past.

Brainchild of Tao Ruspoli, a Los Angeles filmmaker, who years ago became fascinated by the Salton Sea, and backed by other wealthy sponsors, the Bombay Beach Biennale welcomed guests back for its second year.

This year was a little grander as the town hosted the opening of an opera house, a drive-in movie theater, a lecture hall, and an art museum. Original pieces of art were unveiled as fixtures along the shore and all created from the ruins of existing buildings and structures.

With free oysters and Champagne to keep the partiers going, a tour was organized down E Street, made up of golf carts, dirt bikes, bicycles, and four-wheelers to take in the new additions.

The event was free to attend and un-publicized, however plenty of people took the opportunity to experience a different side to the Salton Sea and next year is guaranteed to be bigger. Difficult to decide how they can make it better, but with the imaginations of the the organizers involved, surprises are expected and new life for the old place possible.