Powering ahead with Amazon 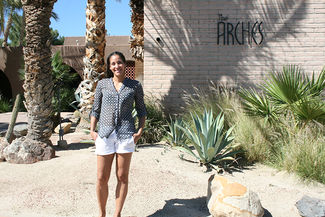 Badwater Run competitor and Amazon Director Jenna Powers, checks in to the Borrego Springs Resort before taking on her latest challenge

What do you do when you're about to turn 40? It's a milestone event and one that most people slip in to as quietly as possible. For some, you get to 39 and are still asking yourself what you want to be when you grow up. For Jenna Powers, Director of Global Associate Experience at Amazon, and one of this years competitors in AdventureCorps Badwater Salton Sea, turning 40 is just another opportunity to stride forward and succeed.

"In 2014 I set the goal to run my first marathon. It was a bucket list item for me and something I thought I would only do once. Before the first race, I wouldn't have considered myself a runner, but the training changed my life in ways I wasn't able to articulate until much later. As 2014 ended (and I had 3 marathons under my belt), I knew I needed a new goal for 2015. The same thing occurred in 2016 and the goals just got larger. With 2017 being my 40th year I thought, what could possibly be left?That's when I came up with the idea to run 40 races. When I shared that goal with my Run the Year group, several mentioned they knew people who'd done something similar, including performing 40 acts of volunteerism. That's what gave me the idea to alter my goal of not just running 40 races myself, but supporting 40 other runners."

Becoming one of the youngest employees at Amazon to be promoted to the Director level as well as completing 27 marathons in the last three years, Powers is taking Amazon's own motto and making it work for her.

You can read the full interview in the Borrego Sun and follow Jenna Power on her journey and that of the runners she is sponsoring, on her personal race website - 40bibs.com.