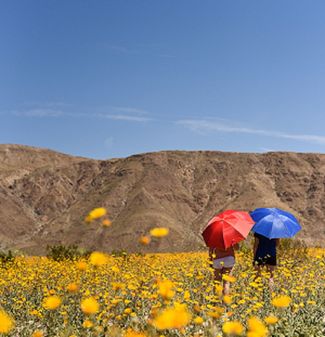 The initial surge of people to the town that was seen on the first weekend, was not re-created for the second weekend. A huge surge in visitors but the traffic jams were less and traffic kept moving.

Porta poties were brought in, donated by individuals and distributed around town and in the main flower hunting areas. Restaurants put up signs apologizing to customers for the expected delays due to kitchen size etc, however the restaurants did a steady turn over rather than the onslaught originally seen.

Despite negativity seen in certain publications, the town coped admirably and the residents that can be counted on every time to dig deep, donate and support, came through and the large business owners who don't and won't, as usual didn't.