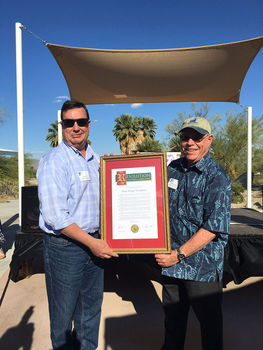 The ABF held a special recognition and fundraising event at the UCI-Burnand Desert Research Center for a celebration of 50 years of partnership between ABF and the Anza-Borrego Desert State Park (ABDSP). They raised $16,000 from silent and live auctions. About 160 guests attended, sipping refreshments and entering their names on silent bids for various items, and then enjoying a wide assortment of hors d'eurves (and later dessert delights) from Chef Tom Hildenbrand of Kesling's Kitchen. Live guitar music was provided by Michael Dwyer from San Diego.

But the afternoon's emphasis was on both individual recognition and fundraising. Television personality Dagmar Midcap emceed the activities out on the patio, where recent winds had destroyed the prime shade-producing canopy, so it was a bit on the warm and sunny side.

State Senator Joel Anderson was on hand to present, on behalf of the entire California legislature (and the absent Assemblyman Randy Vopel who sent a rep), to ABF President Ernie Cowan a resolution recognizing sustained efforts in ABF land conservation over the past 50 years; the Foundation has raised over $30 million for ABDSP since its inception. The ABDSP itself covers 650,000 square miles, 50,000 acres of which has been acquired by the ABF and donated to the Park. There are still 15-18,000 acres of land remaining to complete the acquisition process.

Lisa Mangat was effusive in her praise for the ABF's ability to develop many successful partnerships that have contributed to the success of not only the ABF, but also the ABDSP. The manner and means of ABF's partnership success, she added, is the best example in the entire state park system of how to get things done. Terry Gerson, District Services Manager for the Colorado Desert District, also chimed in with his accolades for how well the ABF coordinates efforts with Park personnel.

And then it was time to raise some more money. Ken McCormack auctioned off about everything not tied down – a wolf center tour, a San Diego getaway, two hiking tours, two biplane rides by Rick Fordem, a La Casa del Zorro getaway, and a San Diego Safari Park excursion.

McCormack also raised a couple of thousand bucks in ad-lib donations for a new canopy for the UCI patio.

Donor Relations Manager for the ABF, Brianna Fordem, was grateful for the $16,000, adding, "We are so pleased by the number of people who were able to attend the event, including our ABF Impact Tours offered to all attendees. Lead by experts, staff, and board members, these special tours gave a closer look at how ABF has impacted the health and vitality of this special parkland. The day was filled with delight -- old friends and colleagues revisiting memories, and new friends being made -- all because of their passion to preserve and protect the treasures of the (ABDSP)." Ms. Fordem concluded by saying, "ABF thanks all of its supporters for contributing to this special milestone, and together we look forward to the next 50 years."