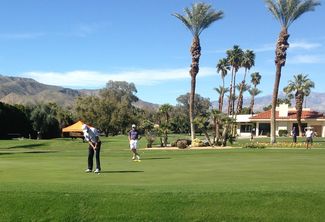 In the Golden State Tour's Desert Classic at de Anza Country Club, local favorite Damien Telles held up under pressure after a nasty bogey on his eighty hole to sink a critical birdie on his ninth, and he finished the round with an eagle on the par-5. He goes into the final pairings on Friday in sole possession of third place, four strokes behind leader Allistair Docherty of Vancouver, Washington.

I did not see leader Allistair Docherty play, but with eight birdies in this second round, I'll bet the farm that while he hit good off the tee and putted well, he had some great approach shots on his way to a 63, three shots better than his field leading Round-1 score of 66.

Trevor Simsby missed the final cut on Friday, Michael Weaver tees off at 9:44 a.m., and Damien Telles tees off at 10:00 a.m.