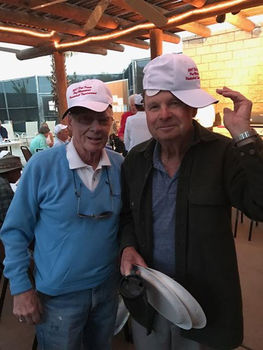 Don Irwin doesn't play in Pickle Ball tournaments anymore, but the spry 90-year old is still alive (see photos for multiple verification) and playing the game, urging other seniors to take up the rapidly exploding sport.

The 2nd Annual Irwin Pre-Memorial Pickleball Tournament was held at the RoadRunner Club on Feb. 16, where 62 players, male and female, vied for bragging rights and trophies. Everyone got hats with the pre-memorial logo, too! Playing on eight designated pickleball courts previously used for tennis, players needed a perfect score of 44, or close to it, after four games of round-robin play to make the tourney finals.

The main thing, however, was having fun. Marty Key, a fine female player, could see the writing on the wall early in the tournament. "I lost the first game, but it's okay," she said with a big smile, "I'll start drinking early."

Playing as a team, Bo Barker and Dan Postma won their playoff for the ultimate win, while Edel Bahr and Jan Henry won for highest individual scores in their categories, Advanced and Intermediate, respectively.

And as for future Annual Irwin Pre-Memorial Pickleball Tournaments? "I'm going to make them laugh about and suffer with that long title for another 15 years," says Irwin, "but those will be great years."

And Don, see you next year at your 3rd Pre-Memorial!