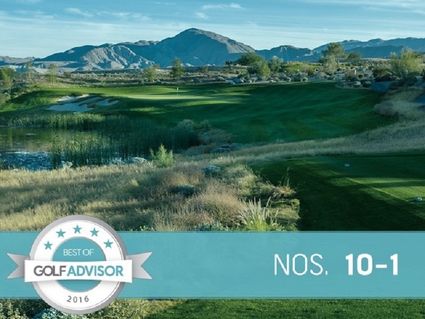 All Borregans have good reason to be proud of the Rams Hill golf course. It was just awarded "the most coveted prize in golf course ratings" by Golf Advisor. The people at Rams Hill who made that happen are to be congratulated.

What began back in 2005 as a goal of revitalizing the Rams Hill course has led to the best customer-rated golf course in America in 2016. It was a worthy eleven-year effort and a stunning result by any standard of measurement. Architect Tim Jackson, working with original course designer Tom Fazio back in 2005, had this to say about the course: "It was a resurrection. Management is respectful of the community and knows what Borrego is all about. They know what this course means to the community. It was great to see our initial efforts bring the course back to life. The experience you have here at Rams Hill is as good as anything you will find on any golf course anywhere."

Course superintendent Steve Gregory said that on winning the #1 status, "It's a great honor, and when you see the looks on faces of the people, it makes all the hard work worthwhile." Former president Barack Obama was scheduled to play golf at Rams Hill after inauguration ceremonies in Washington, D.C., but he couldn't fly into Palm Springs due to the recent rainstorms pummeling the region. But getting back to Gregory's comments, he added, "It's nice to be able to put a town like Borrego Springs on the map."

Piggybacking the comments from Gregory, Mike Setchell, Rams Hill PGA Director of Golf, added, "It's fun to be part of a team that 'gets it.' It's nice to bring that here."

Bill Berkley, Rams Hill co-owner and CEO said, "Steve (Gregory) hit the nail on the head -- we think Rams Hill means a lot to Borrego." He added that in addition to the number one ranking from the Golf Advisor survey and ranking third behind only Pebble Beach and Spy Glass in another national survey, "Rams Hill is something pretty special."

So, congratulations to the Rams Hill team that made the golf course what it is today, and for their much-coveted award (from those who play the game) for the best rated golf course in the country.