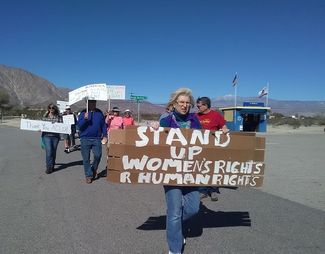 Horns are beeping around Borrego this morning as residents are out, for the third weekend in a row, to make their feelings known.

Christmas Circle was once again the starting point for the team to stand protest, before heading up Palm Canyon Drive and back.

On what many perceive as a ban on Muslims, George Washington School of Law professor Jonathan Turley said on the Sunday after President Trump's Executive Order on immigration was issued,“The law does favor President Trump in this regard...because the law and past precedents give the president sweeping authority” to do what Trump has done.

Mr. Trump is, however, a poll watcher and very concerned, some say obsessed, with public opinion. His national approval rating dropped eight points in his first week in office, according to the latest Gallup poll. Historically, when large majorities of eligible voters are shown to be against a given policy, what is legally permissible may not count for much from a political standpoint.

If you want your rights heard, why not join in with the group. Whether you agree with their signs, or want to make your own, public opinion matters and every voice counts.