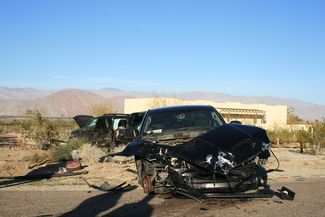 A two vehicle collision took place on Fri. Jan 6 at the uncontrolled junction of Verbena Drive and Five Diamonds Road.

One of the cars, a black Dodge Ram driven by a nineteen year old local resident saw one of its tires torn from the vehicle, while the other car spun in to the fence of a local property. The second vehicle was driven by a mother down from Canada, who had her two young children in the back and was visiting the area for the first time, on the way to see the children's grandmother. The mother and children were taken to Pioneer Hospital although all parties involved, suffered only minor injuries.

No indication of DUI or excessive speed were reported and Officer Rob Tracy who was at the scene, stated "Both parties claim to have not seen the other driver until the last second."

Investigating the incident is Officer Ed Aguirre who is temporarily covering Borrego Springs and was actually in Ramona when the call came through.

Advice from Tracy when approaching an uncontrolled intersection is to slow down, make sure you are the first vehicle in to the area before proceeding to cross the junction.