A Sea of Green Blankets the Desert 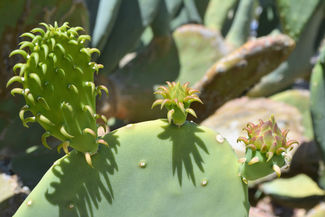 The Ocotillos are green and the recent storms and abundant rainfall has given life to the upcoming flower season. This springtime shows promise for seedlings to spring up throughout the desert floor. Some mountain slopes are already a sea of muted green from desert brittle bush and green ocotillo branches.

A welcoming sight for the Anza Borrego Desert State Park and marking a relief to the California Drought that has officially occurred for several years. Desert plants and cacti have had a difficult time with some plants perishing in the hot and dry desert climate and recent Drought.

Everything now is starting to look refreshed and alive. Mother Nature has again surprised us with the resurgence of many types of flora. The ocotillo that was once brown and dead looking has bushy, green, and lush foliage. The ocotillo around the Anza Borrego Desert State Park seems to have suddenly sprung back to life. It is natural for Ocotillo to lose the green leaves as the soil dries out. In about another month or so the bright crimson orange flowers will be blooming on this beautiful desert plant.

Ocotillo is a plant that is indigenous to the Southwestern United States including Southern California, southern Nevada, Arizona, New Mexico, western Texas and northern Mexico. The official name is Fouquieria splendens. Although not a true cactus, for most of the year, the Ocotillo plant appears to be large spiny dead sticks. With the adequate rainfall Borrego has had, the plant quickly becomes lush with small (2–4 cm), green leaves, which may remain for weeks or even months.

The red flowers pictured, appear at the ends of the ocotillo branches from March through June or later, depending on rainfall. This year's rainfall promises a vibrant kaleidoscope of desert landscape flowers including desert purple verbena, yellow brittle bush, bright magenta beaver tail cactus, white desert primrose and many more.

Currently there is not too much blooming as it is only early February but the soils are still moist and seedlings are sprouting throughout the desert floor. Leaves on the desert lily and some verbena are already coming up. The ocotillos are green and this year will be a colorful wildflower season.