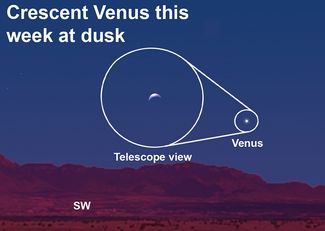 It was during the early years of the 17th century that the Italian astronomer Galileo turned his new optic tube skyward.

Many people believe that Galileo invented the telescope, but this just isn't so. The optical tool most likely came from Holland decades earlier and had been used to help spot approaching ships long before they were visible to the eye.

Galileo was also not the first ever to aim a telescope skyward; others had done that as well. What made Galileo unique was that he built one of these new tools for himself and used it to study the heavens in a systematic and scientific way. And what he found among the stars was enough to rock the world and overturn long-held concepts of the universe.

One of his great celestial observations was that the moon had craters and mountains. Of course, others had found this earlier, but Galileo actually used the shadows they cast onto the lunar surface to calculate the heights of the mountains and crater rims.

When he aimed his telescope toward the planet Jupiter, he found something even stranger. Here he discovered that this distant world actually played host to four moons and that they swung around the planet from night to night.

Both of these are phenomena that we can also see, but this week neither the moon nor the planet Jupiter are in our early evening sky. We can, however, head outdoors after sunset and, with a backyard telescope, see one of Galileo's other great discoveries.

It's in the western sky in the waning light of dusk that you will see the brightest of all planets, Venus, just where it's been for the past few months. Venus appears so dazzling because it's a world the size of Earth that now lies relatively nearby, only 39.1 million miles away. In addition, the planet is shrouded by thick white clouds that reflect back into space about two-thirds of all sunlight that falls on it.

What makes Venus so spectacular right now is exactly what confounded Galileo four centuries ago. The planet appears through a telescope not as a tiny round disk but as a larger crescent.

While this may not seem like an epic discovery in today's fast-paced, high-tech world, it was this simple observation that led Galileo to conclude that Venus showing phases could not happen if it were orbiting the Earth, as both the great Aristotle and the Catholic Church had taught. No, the only way the phases could appear as they did was if Venus circled the sun.

In other words, our world was not the center of the universe, as had long been believed. And this ultimately helped forever change how we view ourselves and our place in the universe.

Now, if you don't have a telescope of your own, simply go online to find an amateur astronomy club in your area (go-astronomy.com/astro-club-search.htm). Chances are they'll be having a free star party sometime in the next few weeks where you can view through their telescopes all the wonders of the cosmos, including the amazing crescent planet Venus.