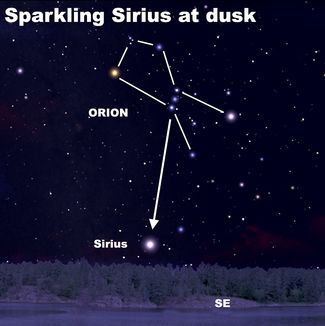 Every year around this time, I can expect my email inbox to overflow and my phone to begin ringing. Folks who spend time outdoors during early-evening hours in mid-January frequently notice a brilliantly sparkling diamond low in the southeastern sky, one that appears to shimmer, dance and dramatically change colors.

I've had people ask whether it's a UFO, an experimental aircraft, fireworks or even the International Space Station, even though it seems to stand quite still in the sky. No, it's none of these. In fact, it's a sight that appears every January, yet many people are amazed to learn that what they're seeing is simply the brilliant, twinkling star Sirius.

Twinkling -- or more scientifically, "scintillating" -- originates not with the stars themselves but with the air through which their light travels before reaching our eyes. We've all seen this effect on a hot summer day, when our view of a distant terrestrial scene over a sizzling roadway or barbecue is distorted by rising heat waves. Similarly, a star's light distorts thousands of times each second as it travels from the still vacuum of space into our thick, turbulent atmosphere, especially when we view it low in the sky.

The amount of twinkling a star displays depends on the steadiness of the air through which its light must pass. The more turbulence there is, the more a star will appear to twinkle. That's why stars low in the sky seem to flicker and flash more than those overhead: Their light must pass through a much longer column of air on its way to our eyes.

Wait an hour or two, though, and you'll notice that the effect is reduced. As the Earth turns during the night, Sirius appears to rise higher in the sky and appears to twinkle much less. If, on the other hand, a storm system has just passed through and the atmosphere is disrupted, Sirius (and all the stars) will appear to twinkle much more than if we were covered by stable air -- even if they appear high overhead.

Watch Sirius rising and you'll also discover that it doesn't just appear to twinkle wildly; it seems to fire off colorful sparks that often prompt calls to observatories and emergency personnel. The effect is even more impressive when viewed through binoculars or a telescope thrown just slightly out of focus.

Though it appears unusual to the novice, this is also a perfectly natural phenomenon. The star's white color is actually a blending of every color of the spectrum, and each color is bent rapidly in different directions at different times by moving air currents. Because of this, Sirius becomes a dramatic and colorful sparkler!

It was this stunning spectacle that led author Martha E. Martin to describe the appearance of Sirius in her 1907 classic book "The Friendly Stars." She said: "He comes richly dight in many colors, twinkling fast and changing with each motion from tints of ruby to sapphire and emerald and amethyst. As he rises higher and higher in the sky he gains composure and his beams now sparkle like the most brilliant diamond -- not a pure white, but slightly tinged with iridescence."